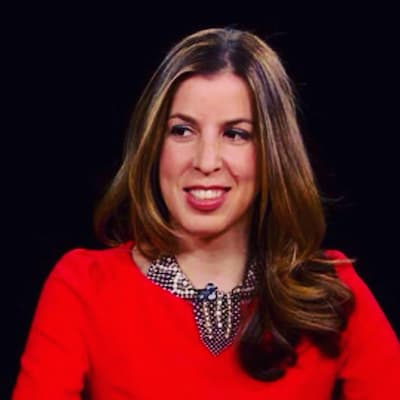 Amie Parnes is an American correspondent for The Hill newspaper in Washington since October 2012. She often remains in the news because of work, her work-related news updates, and the updates regarding her book writing. She has also developed herself into an author and co-authored many books, papers, and memoirs with her long-time partner Jonathan Allen.

She stands at an average height of 5 feet 5 inches (1.65 meters tall) and she weighs 58 kilograms (128 lbs). She has dark brown hair and brown eyes. Her other body measurements are currently not publicly available. We will update this section when the information is available.

Amie was born in Miami, Florida. Amie was brought up along with her sibling sister, whose name is Sherry Parnes. Our efforts to find out more about her family came to no avail as no such information is publicly available. Thus, the identity of her parents is still unclear. We will update this section once this information is available.

Amie is a happily living married woman. She is married to her long-time boyfriend and husband, whose name has not been revealed. She is blessed to have a child but she has not shared her child’s name. Amie has shared her marriage snaps on her social media and she quite often shares photographs of her family and friends. Her social media pictures show that she remains highly involved with her son’s daily activities. She has one Halloween photograph with her son that she shared on her social media with the joy of festivities.

Amie started her journalism professional line after she graduated from college. Over the number of years, she has been growing continuously, within the media and networking and today, she is now a senior correspondent working for The Hill. While beginning her professional life, she served her time and life for White House reporting for the Virginia-based POLITICO media outlet.

She spent four years working for POLITICO and later began her professional life with The Hill as a community correspondent. Amie left her designation or position at POLITICO in December 2011. Throughout her tenure with The Hill, she gave her time for reporting on the McCain and Obama presidential campaigns in 2008. During the time, she reported and lived in New York and reported live on various New York-based ongoing news.

While working for The Hill, she wrote for them, mentioned the activities of The White House and information about the house legislatures, added her writing about former president Obama’s 2012 reelection marketing campaigns, and worked on the newest 2016 Hillary Trump marketing campaign. Later, her prime focus became Trump’s administration and the related activities or actions taken by the administration.

She has appeared steadily on shows on U.S TV including Fox News, CNN, MSNBC, and various other platforms. She has appeared on channels and media outlets including NPR, PBS, the N.B.C. Sunday morning program “Meet the Press” and various others. During Obama’s tenure as president, she was responsible for live reporting on the 2008 and 2012 presidential elections. She reported for politics while being with both The Hill and POLITICO.

Amie’s net worth is estimated to be between $1 million – $5 million dollars. This includes his assets, money, and income. His primary source of income is his career as a Journalist.