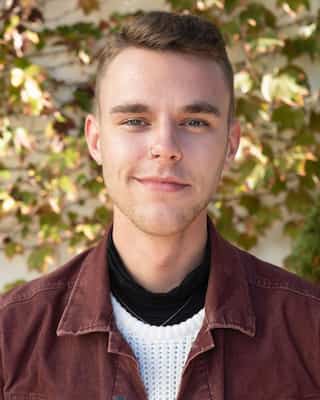 The American talented singer, Beane (born Brennan Hepler) is famously known for being a contestant on the 19th season of the American singing competition television series American Idol, where he first appeared on April 5, 2021, as a solo performer as well as an all-star duet alongside Josh Groban.

Hepler stands at a height of 5 feet 11 inches (1.80 meters) and weighs 61 kg (134 lbs). He has expressive hazel eyes, brown hair, and a boggling grin that makes him unmistakable of all.

Hepler is the son of Shelly Hepler (mother) and Christopher M Hepler (father), a graduate of Williamsport High School then later attended Williamsport Area Community College where he earned his associated degree in business. He also attended Lock Haven University and earned his bachelor’s science degree in sociology.

Hepler is a 2019 graduate of Loyalsock Township High School and later went on to study at Berklee College of Music in 2015 and majored in Music Business Management. From there, in 2017, he worked as a creative director. Following the next year, he joined Club Passim and Silver Arrow Band as a lead vocalist.

Hepler is openly gay. He is currently in a romantic relationship with his loving boyfriend, Anthony Rodriguez. The pair, having begun dating on March 17, 2020, celebrated their first anniversary on 17 March 2021 with Beane’s Instagram caption:

Celebrating my love today, we’ve been dating for a year, kinda cool to be in love with your best pal ? swipe for shenanigans.

Hepler’s singing career sprouted after he joined Uptown Music Collective in Williamsport. He performed at Berklee and later adopted the name ‘Beane’ and decided to do his gigs across the country. In February 2002, he had people cheering for him for his show at the Great Scott.

Hepler released his debut solo EP, Human Beane in 2017, which contained six songs that covered topics such as moving away from small-town upbringing, opening up about sexuality, mental health, and things that resonated with him.

In April 2021, Hepler released other songs, including “Lost in the sound”, “We’re Alright”, “In Time”, “Little Stray”, “The Way It Goes” amongst others.

Hepler is a contestant in the 19th season of the American singing competition television series American Idol. He began by auditioning as the series’ contestant in Ojai, California, where he sang a cover of Vulfpeck’s “Wait For The Moment”. Although judge Luke Bryan voted “no”, judges Lionel Richie and Katy Perry voted “yes”, sending him to the next round.

He then joined Casey Bishop, Christian Terry, and Althea Grace in the “Rock” category of Genre Challenge. He sang “Bennie and the Jets” by Elton John. He later appeared in a duet with Kari Erickson, titled “Dean and Carrie” singing “Watermelon Candy” by Harry Styles.

Then the judge told them that Hepler had improved, but Kari had not improved. During Showstoppers Round, he sang “What’s Going On” by Marvin Gaye. In the final verdict, the judge told him that he was among the top 24.

Hepler played Dua Lipa’s “Don’t Start Now” and Robbie Williams’s “Angels” in a duet with Josh Groban. It received enough votes to be considered “safe”. Hepler sang “Searching for a Feeling” by Thirdstory. He did not get enough votes to enter the top ten, which puts him in danger while waiting for the judge’s ruling. Bean sings “Our Growth” by Ben Platt. The judges chose him as a wildcard and made him one of the 12 finalists.

Other contestants on season 19 of American Idol include;

Beane Net Worth and Salary

Details about Hepler’s net worth and salary are not yet disclosed. However, information about how much he makes and the assets he has will be updated as soon as it is available.