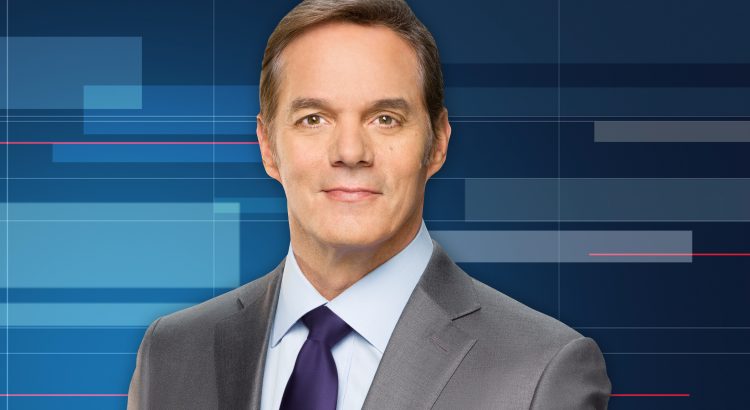 Bill Hemmer is an Emmy Award-winning American television anchor and reporter. Currently, he is the anchor of FOX News Channel’s Bill Hemmer Reports every weekday at 3-4 PM/ET. He joined FNC in 2005 after leaving CNN where he served as co-anchor of American Morning, and of both CNN Live Today and CNN Tonight.

He is one of FNC’s top breaking news anchors. Throughout his more than a decade career at the station, Hemmer has provided extensive live coverage of several major stories. In 2018, he contributed to FNC’s special live coverage of that year’s midterm elections and broke down the results on the electronic “Bill-Board.

Hemmer was born on November 14, 1964, in Cincinnati, Ohio, U.S. He is 55 years old and celebrates his birthday every Nov 14. Hemmer’s zodiac sign is Scorpio.

Though there is no known information about whom Hemmer is currently dating, it is known that Bill has been engaged in several other relationships previously. The most conspicuous relationship was with the Canadian model Dara Tomanovich. The duo was in a serious relationship for 8 years that is from 2005 to 2013.

Just when people expected that Bill would soon pop the big question and the wedding bells start to chatter, an announcement was made that it was all over. Since the announcement back in 2013, no one has come out openly to say that they are in a relationship with Hemmer neither has he mentioned his dating life ever again. It is safe to assume that he is single.

Bill was born in Cincinnati, Ohio, and is the son of a retired mattress manufacturing company executive, Bill Hemmer. He is the middle child and the second son of all five of Hemmer’s children. Hemmer attended Our Lady of Victory (Cincinnati) Catholic parochial school before graduating from Elder High School in Cincinnati in 1983.

Hemmer graduated from Elder High School which is located in Cincinnati in 1983. Bill alongside one of his friends began a radio program during their senior year. The show on the radio program used to play fifteen minutes of music during the breaks and before the classes began. Hemmer attributes his passion for journalism to the High School show that he aired.

During his college life, Hemmer worked as an intern radio DJ for Mama Jazz at WMUB-FM. He left WMUB-FM to work at WOXY-FM. Bill would later leave WOXY-FM to join Cincinnati’s NBC affiliate working as an intern.

During his career beginnings, Hemmer loved working as a radio DJ and found fun with it until the mid-1980s while he was working at WLWT-TV in sports production. It was not until then that he realized that he was passionate and more comfortable working in live television.

As passionate as he was, he had made an impact during his internship in the field of broadcasting and he was now on board for grab as he was in his senior year at Miami University. WLW-TV offered Bill a job as a sports producer in their channel.

Gaining expertise in his field of work called for more promising projects on his way and as fate would have it, Hemmer soon left WLW-TV to work with CBS affiliate WCPO-TV as a sports anchor. Bill Hemmer took a break from his day to day work routine in 1990 so that he could tour the world and see more as well as get the exposure.

Bill was 26 at the time and he had to take a nearly year-long long from WCPO-TV. In his tour travel, Hemmer visited China, Vietnam, Nepal, India, Egypt, Israel, and Eastern Europe. During his time in India, Bill visited Calcutta where he spent two weeks working in the children’s clinics run by Mother Teresa.

When he returned from his break, he never went back to his position but went to work as a news reporter for WCPO. Bill later left WCPO to accept a position at CNN’s international headquarters in Atlanta, Georgia.

He anchored from the World Trade Center website in new york town for a month within the aftermath of the attacks of 11th of September 2001, and from Khandahar, the Islamic State of Afghanistan throughout the buildup of the American forces within the beginning days of The War on Terror.

Bill had an instrumental role within the network’s coverage of the Timothy McVeigh execution, broadcasting from Terre Haute, Indiana, where McVeigh was placed to death for his role in the Oklahoma City bombing. In the summer of 2002, Hemmer broadcasted live from Somerset, Pennsylvania, on the mining accident that cornered 9 employees for seventy-seven hours when a wall separating their tunnel from an old house that was abandoned, flooded mine gave means, causing many gallons of water into their workspace.

In 2004, he reported the Democratic and Republican conventions and served as a member of CNN’s prime-time anchors on election night.

He additionally spent over a month covering the crisis in Kosovo, where he announced on the aerial bombing missions from Aviano airbase in the Italian Republic, the exile crisis from Skopje, Macedonia, and on the most recent NATO developments from Brussels.

Hemmer received an Emmy award Award for his work on CNN’s coverage of the 1996 Centennial Olympic Park bombing in Atlanta.

Throughout the war between Israel and Lebanese Hizballah in Lebanon throughout the summer of 2006, Hemmer anchored from the front-lines within the city of Metula in northern Israel. Throughout 2008, 2012 and 2016 election seasons, Hemmer reported the political party conventions from their various cities—including the Iowa Caucus and New Hampshire Primary.

His “BillBoard” on Election Nights is intended to bring knowledge to viewers, capturing the take real-time from precincts across the country. Hemmer was the network’s lead newsman and anchor from the Sandy Hook elementary school shooting in Newtown, Connecticut, in addition, because of the website of the Hub of the Universe Marathon bombing in Apr 2013.

Hemmer traveled to Helsinki, Finland to report on President Trump’s Summit with Russian President Vladimir Putin In July 2018. In 2019 Hemmer reported February’s Nuclear Summit between President Trump and Chairman Kim Jong-un from Hanoi, Vietnam, the terminal that assignment at the demilitarized zone in South Korea.

The new show that Hemmer started in January 2020. It made history after starting with a record of 1.8 million viewers for its premiere episode Monday, trouncing the cable-news competition.

MSNBC averaged one million viewers while CNN averaged only 867,000 during the same 3 p.m. ET time period.

“I am very happy to start this next chapter with you at home. We won’t solve the world’s issues in an hour, but over time we will understand them better. I call it the whole picture,” Hemmer told viewers. “We’ll be fast and we’ll try to be first, but we will focus on being fair. In the end, the whole picture takes time, but over time we hope to see you around here more often and that’s our word.”

Throughout 2008, 2012, and 2016 election seasons, Hemmer covered the political party conventions from their respective cities—including the Iowa Caucus and New Hampshire Primary. His “BillBoard” on Election Nights is designed to bring data to viewers, capturing the vote in real-time from precincts across the country. His political leanings are not known, therefore, it could be assumed that Bill is neutral.

His career has grown over the years and judging from his normal Lifestyle, Bill lives a comfortable life. He earns an annual salary of $400 thousand on the show and also from some commercials.

Hemmer has an estimated net worth of $3 million dollars as of the 2016 report. This figure may have grown exponentially.

To listen to all his podcasts including the one that he sat down with Gordon Chang, an expert on China and author of The Coming Collapse of China where they discussed the ongoing trade war with the U.S. and China, the future of the delicate relationship, and more, visit https://radio.foxnews.com/podcast/hemmer-time/

Hemmer has aired “America’s Newsroom,” which is a Fox News morning show, since launching the program with former anchor and colleague Megyn Kelly. He presently is the co-host with Sandra Smith from nine AM to twelve PM civil time.

When Smith abruptly left Fox News in October, the slot was left a void in the middle of the network’s daytime schedule. Hemmer has taken up the morning show to cover up for Shephard Smith.