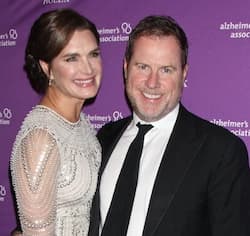 Chris Henchy (born Christopher Thomas Henchy) is an American screenwriter and producer best known for being a creative collaborator with Will Ferrell.

Additionally, Chris has co-created the website Funny or Die and has written several Ferrell films. These films include Land of the Lost, The Other Guys, and The Campaign.

He was born in New York City, to parents Patricia and Michael Henchy. However, he has not shared detailed information on her parents and siblings. We are keeping tabs and will update this information as soon as available.

This renowned scriptwriter met actress, author, and model Brooke Shields in 1999 on the Warner Bros lot. The two became engaged in July 2000 while on vacation in Mexico and married on April 4, 2001. They are blessed with two daughters and reside in Manhattan, New York City.

He attended Saint Mary on the Hill Catholic School. He later graduated from Friendswood High School in 1982, where he was active in journalism and was a member of the yearbook staff.

Additionally, he attended the University of New Mexico, where he received a B.S. degree in finance and was a member of the Sigma Alpha Epsilon chapter.

After graduation, Chris moved to New York City and worked on Wall Street. Later on, he left his job and decided to work in comedy. He got hired by MTV and later wrote monologue jokes for Garry Shandling’s The Larry Sanders Show.

Chris went on to write for Campus Cops in 1996. After writing for a few television specials and some guest-writing stints on series, Chris created and produced the television series Battery Park in 2000, which starred Elizabeth Perkins.

He was a writer for television sitcoms Spin City and Life With Bonnie. Chris created the sitcom I’m with Her with Marco Pennette, which was loosely based on Henchy’s relationship with his wife Brooke Shields. This show was canceled by ABC after one season.

He later became the co-executive producer of Entourage and producer on HBO’s Eastbound & Down. Henchy, along with Will Ferrell and Adam McKay, created the website Funny or Die.

Additionally, Henchy produced The Goods: Live Hard, Sell Hard. Henchy is credited as a writer of the 2009 film Land of the Lost, The Other Guys, and The Campaign which he also co-produced.

In 2018, he was announced to be directing a feature-length film for the television series, Impractical Jokers, with production work by Funny or Die. In February 2020, it was released under the name Impractical Jokers: The Movie.

Chris Henchy Net Worth and Salary

This famous screenwriter has anet worth of $20 million. However, information on his salary is currently under review. We will update the information as soon as available.