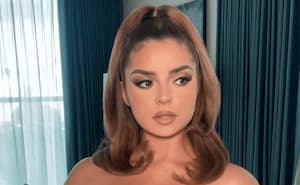 Demi Rose is a British Model, Social media influencer, and global ambassador of the women-centric website PrettylittleThings. She gained fame after she was rumored to be in a relationship with Kylie Jenner’s ex-boyfriend, Tyga.

Demi was born on 27 March 1995, in Birmingham, United Kingdom. Rose is 26 years old as of 2021. Her Zodiac sign is Aries. She celebrates her birthday every 27 of March every year.

She stands at an average height of 5feet 2 inches and she weighs 52 kilograms. She has dark brown eyes and black hair.

She was schooled at New Oscott Primary School and John Willmott School, both are in Sutton Coldfield. Later, she attended Walsall College, England.

She started her journey as a social media influencer during her high school days when she created an account on Myspace, an American social networking service. In an interview, she said,

In school I was quite popular on MySpace and that kind of followed on to Instagram. It was really weird when people started recognising me and stuff on the street. I just got used to it.”

At the age of eighteen, she gained popularity when she posted her saucy selfies on her Instagram accounts. In an interview, while talking about her instant stardom, she said,

She starred in the music video of DJ Khaled’s song How Many Times (2015). She was also featured on the cover of Sixty6 Magazine in 2016. Thereafter, she moved to the United States to pursue a career in lingerie modeling. In the US, she signed a contract with Taz’s Angels, an American publicity group. She has earned more than 16 million followers on Instagram. In 2020, she became the global ambassador of PrettyLittleThing, a UK-based fashion retailer.

Demi has an estimated net worth of $4 million. She has earned a lot of her money from her career a Model, Social media influencer, and ambassador.