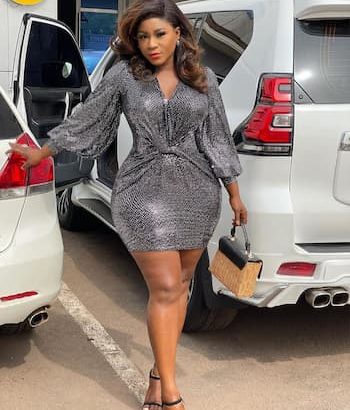 Destiny Etiko is a Nigerian actress who won the City People Movie Award for Most Promising Actress at the City People Entertainment Awards in 2016. Etiko gained after she featured in a movie titled Idemili which was produced in 2012 by Ernest Obi but was not released until 2014.

Destiny Etiko was born on 12 August 1989 in Enugu State, Nigeria. She is 32 years old as of 2021. Destiny celebrates her birthday every 12 of August every year.

Etiko is a Nigerian actress who appears to be of a good height and weight. Her body measurement is not available. The information will be updated soon.

She is the daughter of a veteran Nigerian actress though this has never been confirmed because her mother doesn’t like media attention. The actress revealed in an interview that her mother was an actress but abandoned her career to take care of her family.

The actress said that she would not like to follow in her mother’s footsteps by choosing to raise a family and abandoning her career. Further details about her parents and siblings are not available and will be updated as soon as we get the information.

The beautiful actress is not married and has never been engaged. However many people especially her fans think that Destiny Etiko is married because of a role she played in the movie ‘ My Private Part’ where she shaved her hair after the death of her husband whom people accused her of killing.

When it comes to getting married, the actress revealed that she would want a man who understands her interest in acting. Destiny added that she would never ditch her career for anything, not even marriage.

She attended both her primary and secondary school education in Enugu State where she obtained her First School Leaving Certificate and the West African Senior School Certificate. Etiko in a bid to obtain a university degree relocated to Anambra state then applied to study Theater Arts At Nnamdi Azikiwe University located in Awka. Etiko was accepted and granted admission and eventually graduate with a degree in Theater Arts.

Destiny registered with the Actors Guild of Nigeria when she was in secondary school and was determined to be an actress. She took part in rehearsals and auditions and was selected to feature in several movies playing minor roles before venturing into major roles in the industry.

The curvaceous actress came into the limelight when she featured in ‘Idemili a movie that was produced and directed by Ernest Obi, an Award-winning film director. After the production of the movie which was a rave in Nigeria and other countries, she got more acting opportunities, making her one of the most successful sought-after Nigerian actresses of recent times.

She has won a couple of awards, including the ‘‘Viewers’ Choice Award’’ and the ‘‘Golden Icon Movie Academy Award’’. The success of the Idemili movie has landed the actress roles in several box office movies such as “Black Xmas,” “More Trouble,” “After Wawa,” “Enuma,” “School Trouble,” etc. Currently, she is one of the most popular actresses in Nollywood.