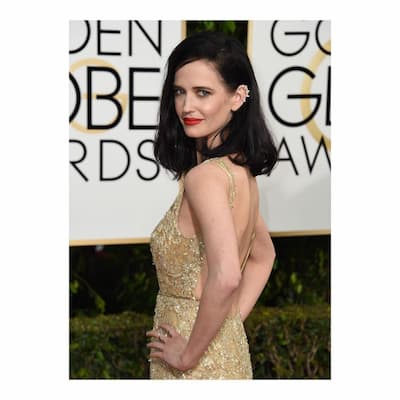 Born in Paris, France Eva Green (Eva Gaëlle Green) is a French actress and model. She gained fame when he played a role in Sibylla, Queen of Jerusalem in Ridley Scott’s historical epic Kingdom of Heaven in 2005.

She played a role as Morgan Pendragon in the Starz historical fantasy series Camelot.

She stands at a height of 1.7 meters tall and weighs 56 kilograms. Her body measurements are 34-25-35 inches. She has dark blonde hair and blue eyes.

She is the daughter of a mother named Marlène Jobert who is an actress, author, Dr. Walter Green, and a dental surgeon and occasional actor. Her father is of Breton and Swedish descent. She has a twin sister named joy.

She went to the American University of Paris, an English-speaking institution. Green continued her studies at St. Paul Drama School in Paris and took an acting course at the Webber Douglas Academy of Dramatic Art in London.

Green is not married. In 2017, she revealed that Harvey Weinstein made an inappropriate advance during a business meeting but she pushed him off. She lives alone and, by her own account, leads a low-key life when she is not working. When asked in an interview what people would be surprised to find out about her, she responded, “I guess people would be surprised to find out that I am a bit of a homebody.

I do not like clubbing or going to wild parties. After a day of shooting, I love to come home and relax by the fire with a glass of wine and a good book. Boring, huh?” Green has expressed interests in taxidermy and entomology; she collects preserved skulls and insects.

She played a role as Morgan Pendragon in the Starz historical fantasy series Camelot in 2011. She also starred as Vanessa Ives in the Showtime horror drama series Penny Dreadful.

The French actress and model have earned a fortune for her career. She has an estimated net worth of $8million.