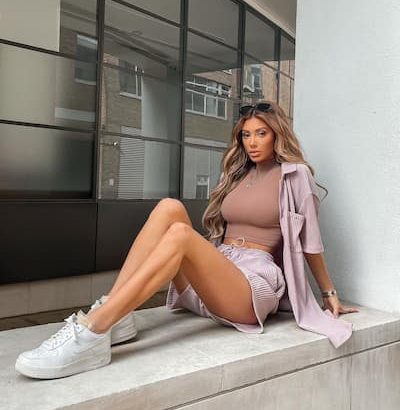 Francesca Farago is a Canadian Instagram influencer, model, and entrepreneur. She gained fame when she debuted in Netflix’s dating series called Too Hot to Handle. She is the brand ambassador of Swank Makeup. She has worked with a variety of brands such as Misha Swim, Revolve, and Fashion Nova.

She stands at a height of 5feet 8inches. She has not shared the information about her weight and other body measurements are not available. She has brown hair and brown eyes.

She was born in Ottawa, Canada to a father named Grant Webb and a mother named Lucy Farago. Her father owns many restaurants like The Works Barrhaven, Orleans, and Katana. She has a younger sister named Katie Webb, and a younger brother named Mason Webb.

Francesca is a graduate. She graduated from Carleton University Law School, Ottawa.

She has a tattoo of ‘two’ written in roman numerals on her right wrist and another tattoo on her feet.

Francesca started her career as an influencer on Instagram. Soon, she started getting modeling assignments as well. Now, she owns a swimwear brand called Farago The Label. Her career had a major breakthrough after appearing in the dating series Too Hot to Handle, which aired on April 17, 2020, on Netflix. She is the brand ambassador of Swank Makeup. She has worked with a variety of brands such as Misha Swim, Revolve, and Fashion Nova.

The Canadian Instagram influencer, model, and entrepreneur has earned a fortune from her career. She has an estimated net worth of $1 million.