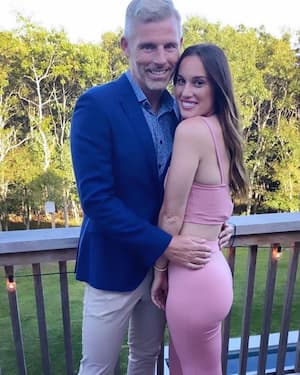 Hannah Berner is an American comedian, reality television star, and social media personality. She is well known for the role she played in the series Summer house. Hannah also performs stand-up in NYC and at clubs around the country.

She stands at a height of 1.7 meters tall and weighs 54 kilograms. Her body measurements are 34-28-36inches. She has brown hair and brown eyes.

In September 2020, she shared her boyfriend who is Des Bishop’s picture through her social media. The two met at a comedy club. In March 2021she announced that she was engaged to Des.

Hannah went to Poly Prep Country Day School and then later completing her high schooling at The Beacon School in Brooklyn. Then later she attended the University of Wisconsin, Madison, Wisconsin.

In 2013 she graduated from the university with completing her Bachelors in Arts, Major in Communications Arts Rhetoric and also certified in Gender and Women’s. In college, she was the MVP of the school’s tennis team.

Berner is a cast of Bravo’s reality series Summer House. The show follows a few men and women between their late twenties to early thirties who spend their weekends and summer having fun.

She went on to join the comedy scene and began directing, editing, and acting in videos on Instagram and writing viral tweets. She also hosts a podcast known as “Berning in Hell” where she interviews fellow comedians, reality stars, and entrepreneurs. Berner also hosts another podcast known as “Giggly Squad,” with a fellow roommate and best friend, Paige DeSorbo.