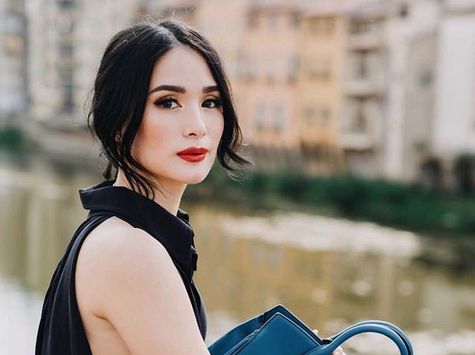 Heart Evangelista was born Love Marie Payawal Ongpauco on February 14, 1985, in Manila, Philippines. She is 35 years old as of 2020. Evangelista celebrates all her birthday in every 14 of February.

Heart is an actress and a businesswoman. She stands a height of 1.57 meters tall. Heart weighs 48 kilograms. He has a beautiful slim body. She has long black hair and black eyes.

Evangelista is the last born child, with siblings from both sides of her parents. She is the daughter of Reynaldo Evangelista Ongpauco and Maria Cecilia del Gallego Payawal.

Heart is a married woman. She got married to Senator Francis “Chiz” Escudero, who was born and raised in Bicol province of Sorsogon. The couple tied the knot in a private ceremony at the Balesin Island Club in the Philippines on February 15, 2015. Heart and Francis were introduced by heart’s ‘mentor’, the late senator Miriam Defensor Santiago, who was a close friend of her mother,

Heart doesn’t have kids she only has a dog named Puppy panda.  In May 2018 heart announced that she was expecting their first child. In the same month, one of the twins she was carrying was lost to a miscarriage. In June 2018, Evangelista announced that she suffered yet another miscarriage, losing the last of her twins.

Francis Escudero is a Filipino lawyer and politician serving as the Governor of Sorsogon since 2019. He was born on 10 October 1969 in Manila, Philippines. He will be 51 years old as of 2020.

Evangelista has also won the Best New Female Personality (Best New Movie Actress and Best New TV Actress) awards from Star Awards for Movies and Star Awards for TV. She has an estimated net worth of $3 million.

Hearts and her husband Francis Escudero tied the knot in a private ceremony at the Balesin Island Club in the Philippines on February 15, 2015.

Heart and her G-Mik co-star John Prats dated each other from 2002 to 2003. The actress has also dated the son of former Isabela Mayor Paul Dy had an on and off relationship from 2003 to 2010. Now heart is married Francis Escudero is a Filipino lawyer and politician serving as the Governor of Sorsogon