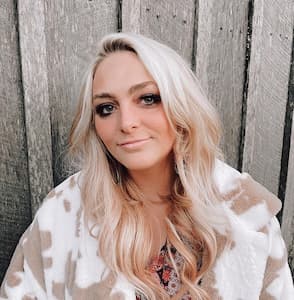 Hunter Girl (born Hunter Wolkonowski) is an American singer and songwriter. She is known for participating in the 20th season of ABC’s singing reality show American Idol. Hunter is originally from Gruetli-Laager, Tennessee. She is currently working for music therapy organizations to help transform veterans’ stories into songs.

She stands at an average height of 1.67 meters tall (5 feet 6 inches) and she weighs 61 kilograms (134 lbs). She has blonde hair and grey eyes. Her other body measurements are not available.

Huntergirl was born in Winchester, Tennessee. She was born to her mother named Chris Wolkonowski and her father is Urla Wolkonowski. She has a sister named Rylan Wolkonowski.

Hunter started performing in her grandfather’s church at age three and started writing originals. She has performed across the United States and won the 2014 Texaco Country Showdown at age fifteen. After high school, Hunter went to Nashville and began playing her signature Ovation guitar at gigs in downtown venues such as Tootsie’s, Rippy’s, Crazy Town, Jason Aldean’s Bar, The Listening Room, and HonkyTonk Central.

Hunter has won several songwriting competitions including Nash Next. She has performed in front of over 30,000 at the Country Stampede festival in Manhattan, Kansas. She earned this honor by participating in the Nashville Songwriters Association International (NSAI) Songwriting Contest, a competition judged by industry officials and an online vote.

In 2022, Huntergirl participated as a contestant in the television reality show American Idol and received a standing ovation from 3 judges Katy Perry, Luke Bryan, and Lionel Richie.