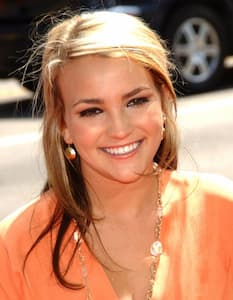 Jamie Lynn Spears is an American actress and singer. Lynn played the role of Zoey Brooks on the Nickelodeon teen sitcom Zoey 101 from 2005 to 2008. She also played as Noreen Fitzgibbons in the Netflix romantic drama series Sweet Magnolias.

Lynn was born on April 4th 1991 in McCombo, Mississippi and raised in Kentwood, Louisiana. She is 30 years as of 2021 and celebrates her birthday on the 4th of April every year.

This famous American actor is about 1.64 meters tall and weighs 55kg.

Lynn is the the daughter to James Parnell and Lynn Spears. She has older siblings Bryan and Britney. Britney is a great singer and Bryan is a film producer. Britney was placed under a conservatorship led by James (his father). In June 2021, James was accused of guardianship abuse by his daughter, Britney.

On 20th December 2007,in an interview with OK! Magazine, Lynn announced that she was expectant by her former boyfriend, Casey Aldridge. At the time she was 16 years old. Casey, whom she had been dating for 2 years, was 18.

In March 2008, Lynn confirmed her engagement to Aldridge. In May 2008 the two moved Liberty, Mississippi, and purchased a house, with Lynn stating that they would raise their child here.

she gave birth to their daughter Maddie Briann Aldridge on June 19, 2008, in McComb, Mississippi. Jamie and Casey ended their engagement in March 2009, and Spears moved out in December 2009.

Aldridge and Lynn reconciled in August 2010, but ended their relationship a second time in November 2010.

Lynn subsequently began a relationship with Jamie Watson, a businessman who owns communications services Advanced Media Partners. After two years of on and off dating, Lynn and Watson announced their engagement in March 2013. The two married on March 14, 2014 in New Orleans. On April 11, 2018, Lynn gave birth to her second daughter, Ivey Joan Watson.

Lynn attended Parklane Academy, where she was a cheerleader, and point guard of the basketball team. She studied with tutors while filming Zoey 101 in Los Angeles.

In February 2002, Lynn was made her acting debut in the Paramount Pictures drama film Crossroads which starred her sister, who portrayed the central character Lucy Wagner. Lynn made a cameo, playing the younger version of Britney’s character. Following crossroads, Nickelodeon cast Lynn as a regular performer in the eighth season of the sketch comedy series All That.

In August 2004, Jamie signed a development deal with Nickelodeon in which she would star as the advocator in her own scripted television series that would air on the network. The series was later titled Zoey 101 and Spears portrayed the role of Zoey Brooks. The series centered on Zoey and her friends who attended a fictional boarding school, Pacific Coast Academy. Lynn recorded the series theme song, titled “Follow Me”, which was written by her sister Britney Spears. The series premiered on January 9, 2005. The series being the network’s highest rated series  premiere in over eight years.

Spears won a Young Artist Award and a Nickelodeon Kids ‘Choice Award for her performance. Nickelodeon announced the fourth season as the series’ last season. The series finale, “PCA Confidential” aired on May 2, 2008. Nickelodeon issued a statement shortly after the announcement of Lynn being pregnant at the age of 16 stating that the network respected Lynn’s decision to take responsibility and nothing that its primary concern was her well-being.

In December 2007, Variety announced Jamie had signed on to guest appear in the ABC comedy sitcom series Miss Guided, in which she played the role of the promiscuous high-school student Mandy Fener in the episode “Hot Sub” which aired on 20th March 2008. The same year, Lynn voiced Goldilock in the direct-to-DVD animation film Unstable Fables: Goldilock and 3 Bear Show.

In 2011, she moved to Nashville with her daughter Maddie and begun working on a country music album with a number of local music producers. On the 7th of November 2011, Lynn held a small concert at the Rutledge in Nashville in which she performed a set of original songs.

On November 25, 2013, Jamie released her first single “How Could I Want More” from her upcoming debut album. The Song came at number 29 on Billboard’s Hot Country Songs, and at number 8 on the Country Digital Songs chart, for the week ending December 7,2013. Kevin Rutherford described Lynn’s performance as “sweet and innocent” yet powerful, and suggested the song “Chillin’ With You”.

On May 27,2014 Jamie released an EP called The Journey. The EP was at number 5 on the Billboard’s Heatseekers Albums, and at number 24 on Top Country Albums. Kramer Jana recorded a song Lynn co-wrote, I Got the Boy,” which was released as the second single from Thirty One in 2015

On March 15, 2016, Lynn performed at the Grand Ole Opry in Nashville. She was introduced to the show by her two older siblings who made surprise appearances to the show.

On June 24, 2016, Jamie released her second single, “Sleepover.” She described the song as “Young, flirty and empowering”. Lynn was a presenter and a performer at Radio Disney Music Awards in April 2017. In an episode that was aired on July 13, 2018, Jamie returned to Nickelodeon for the first time in over ten years as a contestant on the revived game show Double Dare with her daughter Maddie, competing against fellow All That alumnus Josh Server and his niece. Spears and her daughter won over $15, 000 to donate to the New Orleans hospital that treated Maddie following a near-fatal ATV accident in 2017.

In July 2019, Netflix announced that Jamie has been cast as a series regular in the upcoming romance drama series Sweet Magnolias, which is based on the novel series by Sherryl Woods. Spears played young woman called Noreen Fitzgibbons, who works as a nurse and wants to build a new life after making bad choices.

In November 2019, Teen Vogue reported that Lynn has joined the cast of  a new Nickelodeon television series, which is uniting two of the channel’s most iconic shows from the past : All That and Zoey 101.

In July 2020,in an episode of the eleventh season of All That, the cast of Zoey 101 reunited the two shows. Lynn played her old All That character Thelma stump. While working on Zoey 101 reboot, Jamie and Chantel Jeffries recorded a new version of the show’s theme song “Follow Me”. Appearances by JoJo Siwa, Dixie D’Ammelio, Gigi Georgeus, Eva Gutawski, Loren Gray, Lynn Spears and her older daughter Maddie were featured in the music video song.

Lynn has a net worth of about $6 million. Information on her salary will be updated soon as soon.