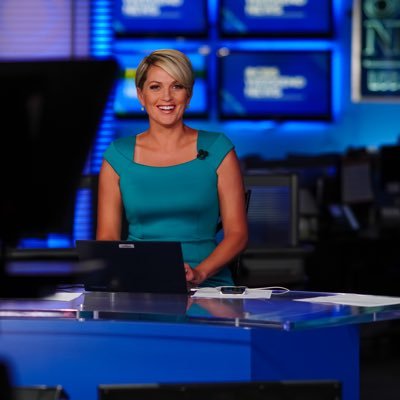 Jamie Yuccas is an American journalist who is currently serving as a correspondent for CBS News based in Los Angelus, California.

Despite Yuccas being an anchor and reporter, she is also an Emmy Award winner. Prior to joining CBS, Jamie worked as a morning anchor and general assignment reporter at WCCO-TV in Minneapolis, Minnesota.

Yuccas stand at an average height of 5 feet 6 inches which is equivalent to 1.68 meters tall. Her body measurements are  34-32-40inches. She has blonde hair and brown eyes.

This Emmy Award winner was born and raised in Minnesota by her parents. Yuccas have only shared little information concerning her parents. Her mother’s name was Karen Yuccas and no information is there about her father. Jamie had a younger brother but his name is not revealed yet.

Currently divorced from her ex-husband John Sheehan, a regional business manager at “Starkey” which is a hearing Aid Company. The two got married in 2007 and divorced in 2017. Yuccas found her love in Bobby Masiar, a pilot, after her divorce. Jamie and Bobby have been seen on vacations together. Their relationship was confirmed after she posted their holiday pictures on Instagram.

She has a degree in journalism and the media at the University of Minnesota & quickly followed that by starting work with KTTC-TV in Rochester, MN, in 2003. While at WBBH-TV, Yuccas won a Florida Associated Press Award for a feature that she wrote, produced, and presented about U.S. Marshal operations. Jamie is currently a popular and well-respected reporter on CBS News, becoming their Los Angeles correspondent in August 2015.

Throughout her career, she has also won an Emmy twice and has reported some very high-profile stories.
Jamie was the first journalist on-site during the horrendous Pulse nightclub shooting in Orlando in June 2016 when 49 people were murdered by anti-gay extremist Omar Mateen. Besides this huge story, Jamie has also reported on the 2016 US Presidential campaign, the 2016 Olympic Games in Rio de Janeiro, Brazil, and the damage caused by Hurricane Harvey in 2017.From

June 2011 to August 2015, Jamie worked as a reporter and journalist at WCCO-TV, the CBS affiliate in Minneapolis.
From October 2004 to June 2011, Yuccas was an anchor, reporter, and producer for WBBH-TV in Ft Myers, Florida. At WBBH-TV, she covered many national disasters, like major hurricanes and the Gulf Oil Spill. From May 2003 to October 2004, she was a weekend anchor/reporter at KTTC/KXLT stations in Rochester, Minnesota.

Jamie Yuccas Net Worth and Salary

This famous journalist earns a salary estimated at $92,684 annually. In addition, Yuccas has a net worth estimated to $1 million.