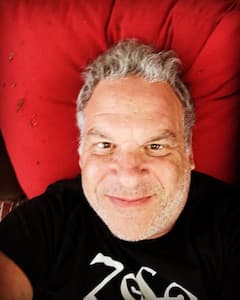 Jeff Garlin is an American stand-up comedian and actor. jeff is best known for playing Jeff Greene on the HBO show Curb your Enthusiasm.

Jeff also played Marvin on Mad About You(1997-1999), Mort Meyers on Arrested Development for Fox and Netflix, and Murray Goldberg, the patriarch of the eponymous family in the ABC sitcom The Goldbergs. Garlin also appeared in ParaNorman, WALL-E, Toy Story 3, and Safety Not Guaranteed, among other films.

Garlin was born on June 5, 1962, in Chicago, Illinois, U.S. Jeff currently 59 years celebrates his birthday every 5th of June.

Garlin is the son of Gene and Carole. He has a younger brother Michael. Jeff got married to Maria Garlin. they were blessed with two children, Duke and James Garlin.

In sixth grade, his father sold his supply business and the family had to relocate to South Florida. Jeff graduated from Nova High School, Davie, Florida in 1980. He attended Broward Community College, followed by a stint at the University of Miami studying film, but eventually dropped out. it was after this that he started performing stand-up comedy.

In 1984, Garlin moved back to Chicago to pursue a stand-up comedy career. Jeff performed with the comedy troupe The Second City. He worked in the box with Stephen Colbert.

While in Wrigleyville, Chicago during the 1980s, Jeff was briefly roommates with Conan O’Brien who was then a comedy writer. Garlin remains close to O’Brien, and after O’Brien was removed as host of The Tonight Show in 2010 so that Jay Leno could return, Garlin stated that he would not be a guest on the show again.

Jeff was hired by comedians Denis Leary and Jon Stewart to help develop their specials. he worked as a stage director for their shows and edited the scripts.

Apart from stand-up comedy, Garlin has a variety of television and film appearances to his credit, as an actor and a stand-up. This includes: Dr. Katz, Arrested Development, Everybody Loves Raymond, Late Show with David Letterman,  Tom Goes to the Mayor, The Life and Times of Tim, The Daily Show, Late Night with Conan O’Brien, and Entourage.

On the 23rd of February, 2010 Garlin released a book, My Footprint: Carrying the Weight of the World, a memoir that documents his journey to lessen both his physical and carbon footprint.

On the podcast network, Erawolf Garlin hosted a show, called By The Way,  In Conversations with Garlin, which consisted of unscripted talks rather than formal interviews.

In March 2018, Jeff was one of the actors who voiced the audiobook A Day in the Life of Marion Bundo.

Jeff Garlin Net Worth and Salary

Garlin has a net worth of about $15 million.