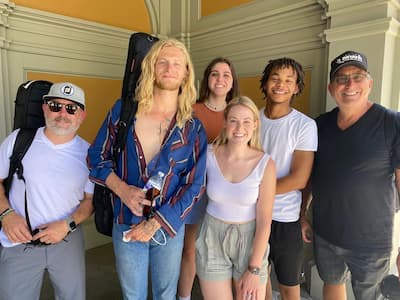 Jordan Matthew Young is an American singer and musician who is currently a participant in the singing reality show “The Voice” in the 20th season.

He is a classic rock and Blues musician and has been an active part of several bands and does various live concerts. On the reality show, he is currently part of Team Blake.

He stands at a height of 6feet 5inches and weighs 72 kilograms. He has green eyes and blonde hair. He has not shared his body measurements.

He was born in Austin Texas and was raised in Roosevelt, Utah by his parents. He has not shared much about his parents and having siblings.

Jordan went to high school education at a local school in Austin, Texas. After he graduated from high school he went to pursue his music career.

Young is among The Voice, season 20 contestants. During the blind auditions of the NBC’s singing competition, he performed a rendition of Keith Whitley’s I’m No Stranger to The Rain. His audition performance had coaches Blake Shelton, Kelly Clarkson, and Nick Jonas turn their chairs.  Jordan went on to choose #TeamBlake to be his coach for the rest of the competition.

Matthew Young revealed that he performed 200 gigs in a year before the COVID-19 lockdown. However, his estimated net worth and annual salary are currently under review and will soon be updated.