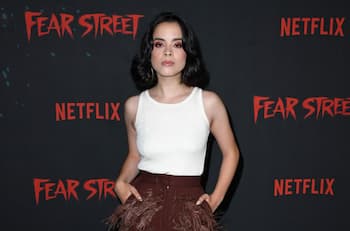 Julia Rehwald is an American actress. She is well known for the role she plays on the Netflix Fear Street. The movie shows an urban legend chasing a bunch of friends in their town and things get bloody very fast. Julia Rehwald plays Kate in the movie who is Deena’s best friend indulges into acting as comic relief while portraying a soft side of hers too.

The information about her education is not publically known. Julia has appeared in movies like Fear Street part one (2021), and Fear Street Part Three: 1666 (2021), and also Where’s Darren?  (2017). We don’t know much about her because she’s still relatively unknown in the acting world. Rehwald shines as Kate in this Fear Street installment, despite the fact that it is only one film and her time on screen is cut short by the end.

She had only appeared in two short films prior to landing three roles in all of the parts of Fear Street films. Those two films are Where’s Darren? A 2017 film and Mukbang Masarap, a 2019 film. The film depicts the story of Darren, a guy who is determined to claim his identity apart from heartbreaks and rejection, despite his conflicting passion and fluid sexuality.

Julia has an estimated net worth of $1million- $5million. The information about her net worth is under review.