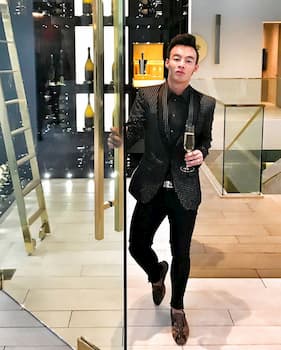 A native of Singapore, Kane Lim, is an entrepreneur as well as a reality television star. Lim starred in the Netflix reality show, Bling Empire.

The show is about the lifestyle of some of the richest Asians that reside in Los Angeles, California. Kane is said to be the son of a Singaporean billionaire but is a self-made millionaire. He started his own business at the young age of 17 and made his first million by the time he was 20.

The Singaporean reality television star, Lim, was born on December 5th, 1990. Kane maintains a low profile about his personal life and has not revealed his place of birth. He celebrates his birthday on December 5th every year. This information will be updated as soon as we have credible information pertaining to the topic.

There were rumors that Kane had gotten plastic surgery on his face as well as his lips filler. Lim has neither confirmed nor denied the allegations and hence the information remains to b a rumor. This information will be updated as soon as we have credible information pertaining to the topic.

Kane maintains a low profile about his family and has not revealed any information about his parents, siblings nor his relatives. Lim has severally posted his mother on his social media accounts. He was born to billionaire parents in Singapore but despite him being born in a wealthy family, his father instilled good values that always kept him humble as they come.

The reality tv star was born in a family that made fortune from real estate as well as a shipping business. His parents also own several malls and commercial buildings in Thailand and Singapore. Kane has frequently posted words of admiration regarding his mother every time she makes it into his posts on his social media platforms.

From his social media posts, his parents celebrated 31 years of marriage in May 2020. Lim has a brother called Kesley though not much is known about him. This information will be updated as soon as we have credible information pertaining to the topic.

Lim who is a reality television star has been in the eyes of his fans regarding his dating life and his sexuality. During the Bling Empire show on Netflix, Kane, drew inspiration from Cherie Chan saying that he would like to break traditions and live his own life. The show revealed Kane asking for numbers from Florent.

In the confessional Kane uttered “The kid in me, it’s like, you don’t want to disappoint your parents. But maybe it’s time to start a new relationship-go and date someone.” Florent reciprocated Kane’s idea with his availability in the dating scene which suggested that Kane and Florent wanted to live as a dating partner.

Not much is known about the relationship though ane is currently single. There is also no known information about his past relationships or if he is yet to be a father. This information will be updated as soon as we have credible information pertaining to the topic.

Lim refers to himself as an entrepreneur, fashion brand owner, and developer as well as a real estate investor. After graduating from high school, Kane attended FIDM in 2010. He graduated with a bachelor’s degree in Arts majoring in Merchandise Marketing.

Before he began his business, Kane served as a Corporal for Singapore Armed Forces where he served until 2010. In December 2018, he established Merryland Pacific Limited which he has been serving as the president of the company. He was also a co-founder for Leighton & Kane in December 2012. Lim is also credited as the designer of luxury customized items in the company.

Kane Lim Net Worth and Salary

Kane has an estimated net worth of $20 million which he has acquired from is different businesses. There is no known information about his annual salary. This information is currently under review and will be updated as soon as we have credible information pertaining to the topic.