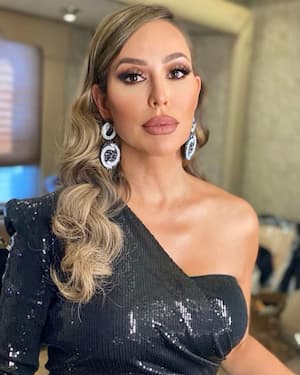 Kelly Dodd born Kelly Meza is an American reality television personality and businesswoman. She is well known for debuting in the Bravo reality series, The Real Housewives of Orange County. She has been one of the main cast of the series since its 11th season.

She is a businesswoman and runs makeup as well as beverage companies. She is married to Rick Leventhal. She was previously married to Michael J Dodd from 2006 until their divorce in 2017.

Dodd was born on 26 September 1975 in Scottsdale, Arizona in the United States.  Kelly is 46 years old as of 2021. She celebrates her birthday on the 26 of September every year.

She was born to a father, Frank Meza, and a mother, Bobbi Meza. She has a younger brother Eric Meza.

Kelly is a married woman. She got married to a TV news reporter, named Rick Leventhal. The two got engaged in November 2019. On 10 October 2020, they tied the knot. Only family and close friends were invited to their wedding due to the global COVID-19 pandemic.

she is a business entrepreneur. She owns a certain portion of the business venture, Positive Beverage. The company offers healthy electrolyte beverages on various favors including Tropical Berry, Peaches, and Cucumber. She will be appearing in the next season of the series. Apart from the reality series, she also happens to be a COO of the beauty company, Kiss Me Mirror. The company offers cosmetics make up products.

Kelly has an estimated net worth of $10 million which she has earned through her career as a reality television personality.

Dodd will be starring in Season 15 of The Real Housewives of Orange County an American reality television series. Season 15 will follow the group as they navigate new and old relationships, changing family dynamics, and, of course, some major friendship drama.

Shannon Storms Beador, Gina Kirschenheiter, Kelly Dodd, Emily Simpson, and Braunwyn Windham-Burke will all be back for more fun and drama in the sun. They will also welcome new Housewife Elizabeth Lyn Vargas, the CEO of an online music company and a soon to be a divorcee. She is ready to kick off the next chapter of her life with a little fun in the OC.

Their relationships will be front and center of this season, with Kelly engaged, Emily experiencing a rebirth of her relationship with husband Shane, Shannon happier than ever with boyfriend John Janssen, Gina moving into a new townhome with boyfriend Travis Mullen, and Braunwyn celebrating 20 years of marriage to husband Sean.