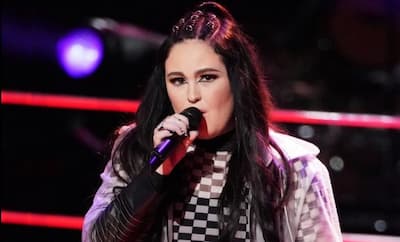 Kendra Checketts is an American singer. She was a contestant in season 16 of The Voice Blind Auditions which premiered on February 25, 2019. she is also auditioning on ABC’s reality television show American Idol season 20 premiering on February 27, 2022.

Kendra stands at an average height of 5 feet 4 inches and she weighs 56kilograms. She has black hair and dark brown eyes. Her other body measurements are not available.

Kendra was born and raised in San Diego, California, United State. Thus, the identity of Checketts’s parents is still unclear. It is also not known if she has any siblings. We will update this section once this information is available.

Kendra has not shared any information about his relationship. She has managed to keep her personal life away from the limelight. This information will soon be updated soon.

she loved acting and often performed mimicries in front of her parents. Her singing talent was exposed while performing in a school talent show during her fourth grade.

Kendra later became more inclined to music after her father suffered a brain hemorrhage which left him hospitalized for a whole year. She began singing to boost her father’s spirit and used to play piano in the hospital lobby to cheer him up. She later began rehearsing songs and she performed in local events whenever she had the chance. Kendra has helped raise over $80,000 for various charities through her singing.

At the age of 11, she co-produced her first single titled Wind Across the Water. Kendra began producing songs of her own and she had multiple releases on Apple Music and Spotify by 2017. her most successful single is I’m Not Sober, which has been streamed over 330,000 times on Spotify.

By early 2019, Kendra had five singles. She found a wider audience after appearing in season 16 of The Voice.

For her first audition, Kendra sang Sober by Demi Lovato. She impressed the judges but it was judge Blake who couldn’t put his hands off the buzzer. She ended up in Blake Shelton’s team. Kendra was highly praised for her mind-blowing singing in The Voice.

She told the voice viewers that she has always been a fan of The Voice. “The show, in general, is so amazing whether it be the producers, hair and makeup, wardrobe, literally everyone on the team is so sweet. They are such genuine people which is why I love the show so much.”

About the song, Sober, she said, “Although I don’t relate to the song in the way she sings it, it was so cool being able to put my own take on it. Demi is such an amazing artist and her music moves people. I was hoping to do the same during my blind audition. Singing this song for me was more of a tribute to her than anything else. She has always been one of my favorite artists and supporting her through her hard times is something I would do in a heartbeat. ”