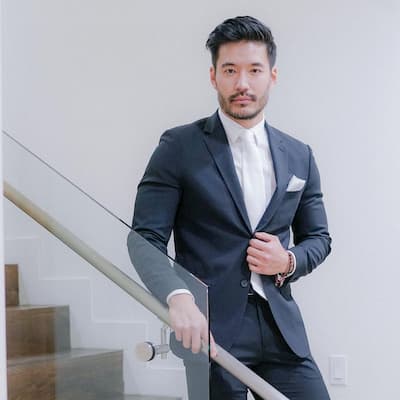 Kevin Kreider is an actor and a model. He is also known for debuting as a reality TV star in the Netflix reality Tv series, Bling Empire.

Kevin has also worked as a professional bodybuilder until he moved to Asia to pursue modeling. He is a successful fitness and lifestyle model represented by the Wilhelmina modeling agency.

Kreider was born on August 21st, 1982 in Seoul, Korea but he moved to Philadelphia after he was adopted by white parents. He is 37 years old as of 2020. Kevin celebrates his birthday on 21 of August every year.

The Korean born reality television star, Kreider, was adopted by white parents and moved to Philadelphia. In the reality television series, Kevin does a DNA test as he is searching for his biological mother, his father, Mark Kreider rarely appeared on the show.

Kevin was adopted by a German/Irish at the age of 3. In the adoptive family, he found loving parents as well as a sibling called Luke Kreider who is a Penn State University alum and co-owned Monheim Imports with his father. His brother Luke was married to Jenn Kreider and has two kids.

Kevin also has an aunt called Kristen Kreider. There is no known information about his biological parents nor his family. This information will soon be updated.

As the show continued, Kreider, developed a liking for Kelly Mi Li. He admitted that she was “hot” and “super successful” and that was what attracted him about her but he later found out that she was in another relationship and backed off.

He turned his attention towards Kim Lee though it did not go far as they turned out to be close friends. Kreider was once rumored to be gay, however, he confessed that he was perceived as a feminine before he bulked himself up to the masculine “American” standards. Kevin is straight and no gay. His relationship status will soon be updated.

Kreider maintains a low profile about his personal life. On the Bling Empire show, he had a crush on Kelly Mi Li, though he later found out that she was in another relationship and switched his attention to Kim Lee whom they later became close friends. There is no known information about him ever getting married nor him having kids. This information will be updated as soon as it has been made available.

The former CEO, Kreider, graduated from William Penn Charter School. He also attended Temple University for his Bachelor in Science degree from 2002 to 2006. He also trained himself in Meisner acting from Maggie Flanigan Studio.

The successful reality television star, Kreider, worked as the CEO of Taejin Entertainment LLC as well as a personal fitness coach. He also worked as the motivational speaker for Beyond Muscle.

Kevin Kreider Net Worth and Salary

The Korean born reality television star, Kreider, has an estimated net worth of $19 million. Kevin was the CEO of Taejin Entertainment LLC and worked as a personal fitness coach which helped him acquire his wealth. He was also the motivational speaker for Beyond Muscle.

There is no known information about his annual salary. This information is currently under review and will be updated as soon as we have credible information pertaining to the topic.