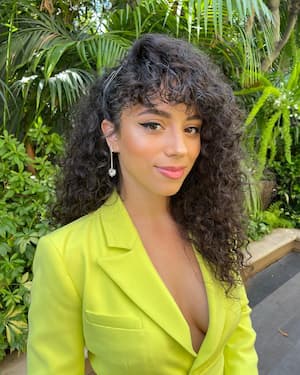 She was born in Toronto, Ontario, Canada to an Afro-Irish descent and her mother is of Portuguese descent. She has a brother an elder brother, named Nikane Madeira and a sister name Kyla Madeira.

Madeira is engaged to an actor named Lovell Adams- Gray. Based on their social media, they have been together since late 2016. Kiana has not shared any information about her having children.

As a model, Madeira began her career and went into the showbiz industry. In the world of film, she is one of the most famous actresses. She’s well known for her Dark Matter appearances. Kiana was invited into the SyFy network after her experiences in kid’s comedy, acting in several films and shows like Dark Matter and Wynona Earp.

It was in early 2018, when Kiana landed the role of Angel Trujillo in the Sacred Lies Facebook Watch series, that space and opportunity to develop was really given to her artistry. She has also appeared on CW’s The Flash, played Suzzie in the thriller She Never Died, and began planning for the second season of the original Netflix series Trinkets, starring as the fierce and insightful Moe Traux.

Kiana is excited to be joining the cast of RL Stein’s Fear Street adaptation! In life, it is Kiana’s goal to communicate with as many people as possible through the screen and stage; to allow them to surrender in a liberating and meaningful way to connection and emotion.

She has an estimated net worth between $1million-$5 million.