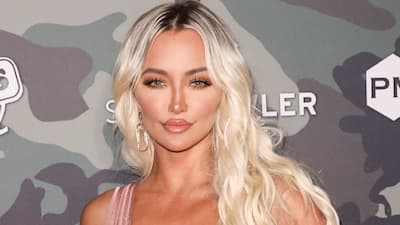 Currently, she models for multiple brands, and has also been featured in publications including Maxim, GQ, Glamour, and has also modeled for Playboy Cyber Girl of the Month for May 2014. She is most well known for her social media preference gaining millions of followers on Instagram and Twitter as well as on Snapchat.

In addition, she is the host and founder of the Eyes Up Here podcast, which is streamed weekly on Focus TV. Some of the noted guests of the show include Kate Quigley and Chris Pfaff.

Pelas stands at an approximated height of 5 feet 3 inches equivalent to 1.60 meters. Additionally, she weighs 55kg.

Pelas grew up in a small village near Independence, Louisiana. She grew up beside her five sisters and three brothers. However, she has not shared detailed information on her parents and siblings. This includes their names, ages, and professions. We are however keeping close tabs and will update this information as soon as it is available.

Pelas has not gone public with her relationship, it is not publicly known whether she is married or in a relationship. Her partner’s information will be updated as soon as the information is available

Pelas attended a rural high school, graduating near the top of her class. Later on, she attended Lousiana State University obtained a Bachelor’s Degree in History, After graduating Pealas worked as a bartender and yoga instructor.

She began her modeling career in 2013 when she did multiple shoots with Playboy. After moving on from Playboy she moved into social media, growing a large platform on social media such as Instagram, Snapchat, and Twitter. Following on these media outlets combine is over 13.5 million followers.

She launched her podcast Eyes Up Here with Lindsey Pelas in April 2018. On her show, she features celebrity guests and personal friends on her own to discuss relevant issues of today.

Additionally, she created viral videos, photos, and content that quickly caught the eyes of local photographs. Since becoming a social media influencer, she has appeared in a number of magazines, movies, TV shows, music videos, and commercials.

She created, directed, styled, produced, and sold her own annual swimsuit calendars Dirty South and Nearly Naked in 2017 and 2018. Pelas internationally sold calendars have received the attention of other social media influencers who seeking tips and guidance on using the internet for success.

She has spoken on digital marketing at many panels and conferences including the Global Ventures Summit in Los Angeles and Mexico City, as well as Complex Con and the Forum.

Lindsey Pelas Net Worth and Salary

Pelas has a net worth amounting to $3 million. Information on her salary is currently under review. However, we are keeping tabs and will update his information as soon as it is available.