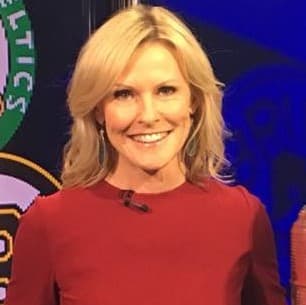 A native of Moscow, Idaho, Lisa Hughes is an award-winning journalist. Hughes works as a news anchor with WBZ-TV News on weekdays at 5 pm, 6 pm, and 11 pm.

Lisa broadcasts the news alongside co-anchor, David Wade. The American born journalist, Hughes joined WBZ-TV in June 2000 after working as a correspondent for CBS Newspath, the CBS-TV Station Group’s satellite news service. While she was working at CBS Newspath, Lis was living in Washington, DC.

The 52-year-old journalist, Hughes is the daughter of a professor at the University of Washington. Her father is a well-known professor though there is no known information about his actual identity.

There is also no known information about her mother, siblings nor her relatives. This information will be updated as soon as it has been made available.

The beautiful Lisa is the loving wife of Mike Casey. Mik is a well known American photographer. The lovely couple met in 2005 and have been together ever since. Casey had a daughter from his previous marriage with Neilie Casey.

The lovely couple agreed to adopt Dylan Douglas who is the son of Kentucky, his mother. The adoption was set for August 23rd, 2011. This information will be updated as soon as it has been made available.

Lisa Hughes Net Worth and Salary

The American-born journalist, Lisa, has covered major news events in New England. She has also had the pleasure of interviewing many of the area’s newsmakers. Hughes has received many honors and awards including both a 2014 Columbia DuPont Award and a 2013, George Foster Peabody Award as part of WBZ-TV’s team coverage of the Boston Marathon Bombings.

Hughes also received an Emmy Award for Best News Anchor in 2014 and 2016. She has also received both Emmy Awards and an Edward R. Murrow Award for reporting. Lisa was named one of Boston’s “100 Most Influential People” and “Best TV Personality” by Boston Magazine in 2020.

The stunning journalist, Hughes, has also been involved in a number of community organizations and charities. Lisa is on the board of directors of Big Sister Boston. She also serves on the development board at Spaulding Rehabilitation Hospital and volunteers her time with Project 351, Children’s Hospital Boston as well as the Boys and Girls Clubs of Dorchester.

Lisa began riding the annual Pan-Mass Challenge to raise money for the Dana Farber Cancer Institute in 2011. In 2002, Hughes ran the Boston Marathon for the American Liver Foundation.