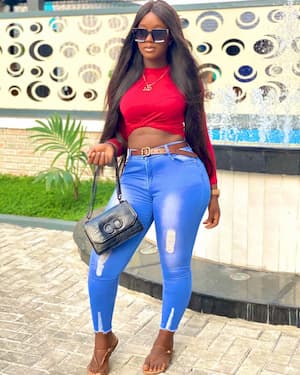 Luchy Donalds is a Nigerian born actress, model, and television personality. Donalds started her acting career through a Facebook friend, who was an executive producer.

In 2006, Luchy joined the Nollywood fraternity as a professional actress and has become an influencer ever since with her great ability to interpret her roles in different Nigerian movies.

The Nollywood actress, model, and television personality, Donalds, is a rising star actress who was born on May 28th, 1991 in Owerri, Imo State in the southeastern part of Nigeria. Luchy is 29 years old as of 2020. She celebrates her birthday on May 28th every year.

The stunning looking actress and model, Donalds, maintains a low profile about her personal life. Her beautiful black hair and brown complexion and dark brown eyes complement her sexy and beautiful figure. Her height, weight, and other body measurements are currently under review and will be updated as soon as we have credible information pertaining to the topic.

The Nigerian-born Nollywood actress, Luchy, was born in Imo State, Nigeria in a family of three children, that is, two boys and one girl. Donalds is the firstborn child in her family as well as the only daughter in her family. Donalds came from a well-disciplined Christian family and that has shown how she handles movie scripts.

Luchy describes her parents as strict especially her father. She once said that she initially never liked her father due to his strictness towards her, but as she grew up into a woman she turned out to be very appreciative of her parents for bringing her up as a disciplined young lady.

The identity of her parents is currently under review. This information will be updated as soon as we have received credible information pertaining to the topic.

Nigerian born actress, Luchy, is single and openly looking forward to finding the love of her life. When she was asked about how she was going to keep her relationship, she said that she would be fully submissive to her husband and would not let fame get in the way of her relationship.

Donalds has not revealed any information about her past relationship. Nollywood actress, Luchy, has no kids but is open to getting them as soon as she has settled down. This information will soon be updated.

The stunningly beautiful Nollywood actress, Donalds, studied her nursery, primary and secondary education at Mount Camel Premier secondary school. At the school, she attained her first and secondary school certificates respectively. Luchy later went to Madonna University for a year and later graduated from Tansian University.

The Nigerian born Nollywood actress began her acting career through her Facebook friend who was an executive producer. Luchy did her first role in her first movie titled Osinachi My Wife, this was after she went through a script that her friend had sent it over to her. The movie acted as her breakthrough in the filming industry as it opened new opportunities for her and as since been featured in different movies including:

The beautiful and skillful actress, Luchy, is known for her ability to fit in different roles and fitting in different roles comfortably. She has been featured alongside Nollywood stars as her co-associates like Uche Nancy, Anita Joseph, Eddie Watson, Patience Ozokwor, and Emeka Ike.

Luchy Donalds Net Worth and Salary

The Nigerian born actress and model, Luchy, has outgrown her acting career and is quickly growing and advancing her career. She is rated as one of the richest and most influential with an estimated net worth of $200,000. There is no known information about her annual salary. This information will be updated as soon as it has been made available.