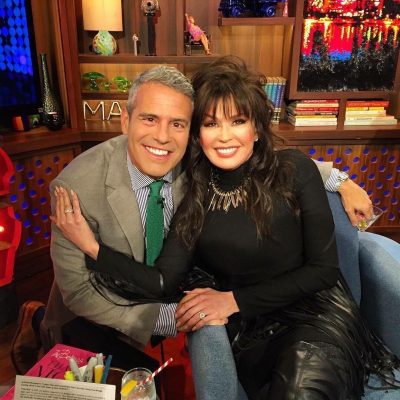 Marie Osmond was born as Olive Marie Osmond. She is an American singer, actress, author, philanthropist, talk show host, and a member of the show business family the Osmonds. She gained fame as a solo country music artist in the 1970s and 1980s. On September 9, 2019, Osmond premiered as a new host of The Talk. She is well known for her remake of the country-pop ballad “Paper Roses”.

Marie Osmond was born as Olive Marie Osmond on October 13, 1959, in Ogden, Utah, U.S. She is 61 years old as of 2020. Marie celebrates all her birthday in every October every year.

The American born musician, Marie, measures a standing height of 1.65 meters tall which is equivalent to 5 feet 4 inches tall. She also weighs 54 kilograms which is equivalent to 119 lbs. Her bra size is 36 with a cup size C while her shoe size is 7(US). Her other body measurements are 39-27-37. Osmond has Dark brown eyes with dark brown hair.

She has been married by three-time. She got married twice to the same man and was engaged once. She was engaged to Jeff Craytonin May 1979 who is an acting student, but the relationship ended in July of that year they canceled the engagement. Osmond’s first marriage was with Stephen Lyle Craig, a Brigham Young University basketball player. The couple got married on June 26, 1982.

Marie has earned a lot through her career. She is an American singer, actress, author, philanthropist, talk show host and a member of the show business family the Osmonds. She has an estimated net worth of $24 million.

She appeared in the doll line on QVC in 1991. While she was in QVC she continued to be a primary source of distribution for her dolls. She has Osmond”Remember Me,” “Baby Adora Belle,” “Kissy and Huggs” and her hallmark doll “Adora Belle.”

Marie started providing a Sunday Message via her Facebook page and Instagram years ago. its inception has grown in popularity and has become an inspiration to her many followers. She pulls each message from her life lessons, wisdom gained from her family, and sometimes quotes of famous people.