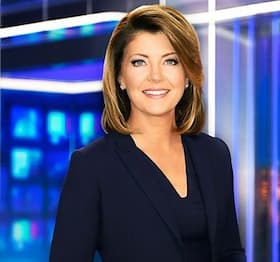 Norah O’Donnell (born Norah Morahan O’Donnell) is an American journalist who is an anchor of CBS Evening News and correspondent for 60 Minutes.

Moreover, Norah is the former co-anchor of CBS This Morning, Chief White House correspondent for CBS News, and a substitute host for CBS’s Sunday morning show Face the Nation.

O’Donnell stands at a height of 1.7 meters and is of moderate weight weighing 58 kg.

O’Donnell was born to parents Noree Bernadette and Francis Lawrence O’Donnell, a doctor, and US Army officer. Norah’s parents are both of Irish descent, with roots in Derry, Belfast, and Donegal. Three of Norah’s grandparents were immigrants, and her maternal grandfather lived in the U.S illegally for 16 years. When she was 10, her family spent two years in Seoul, living in Yongsan Garrison as her father was assigned to work there. Later on, the family moved back to San Antonio.

Norah lives in Washington, D.C., and New York City’s Upper West Side neighborhood with her caring and supportive husband. The husband who goes by the name of Geoff Tracy is the owner of D.C. restaurant Chef Geoff’s. She got married to her husband in June of 2001.

The two met while attending Georgetown together. On May 20, 2007. Norah and Geoff became parents of twins who they named Grace and Henry. Their third child was born on July 5, 2008, and was named Riley’s Norah

She worked as a staff writer for Roll Call, where she covered Congress. This renowned journalist spent twelve of her career at the NBC networks. she was a commentator for the Today Show, Chief  Washington Correspondent for MSNBC, and White House correspondent for NBC News.

Moreover, O’Donnell was also a contributing anchor for MSNBC Live and an anchor on Weekend Today. She reported for various NBC News broadcasts, including NBC Nightly News, The Today Show, Deadline NBC, and MSNBC.

Since joining CBS, Norah has served as an anchor in several of its highest-rated shows, filling in for Scott Pelley on the CBS Evening News multiple times, the first being October 10, 2011.

Additionally, she was a chief correspondent in 2011 and 2012, and become a co-anchor on CBS This Morning in the fall of 2012. On May 6, 2019, the president of CBS News, Susan Zirinsky, announced that Norah had been named anchor and managing editor of the CBS Evening News beginning on July 15, 2019. Moreover, she was also the lead anchor of political events for the network. She would also continue as a contributing correspondent for the 60 Minutes.

This made her become the third woman after Connie Chung and Katie Couric to serve as the program’s weeknight anchor.

Her last broadcast of CBS This Morning was on the 16th of May 2019.

Washington Magazine has named Norah as one of Washington’s 100 most powerful women. She has also been named to Irish American Magazine’s 2000 “Top 100 Irish Americans” list.

Additionally, she has won the Sigma Delta Chi Award for Breaking News Coverage for the Dateline NBC story”DC In Crisis,” which aired on the night of September 11, 2001.

This story was given an honorable mention from the White House Correspondents’ Association for the Edgar Allan Poe Award in the same year.

Norah O’Donnell Net Worth and Salary

As of 2021, Norah has an estimated net worth of approximately $18 million. Moreover, she receives an estimated annual salary of $6 million. Her primary source of income is her journalism career.