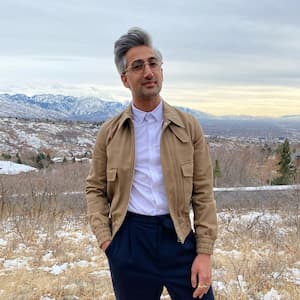 Hails from Doncaster Tan France born (Tanveer Wasim Safdar) is a British-Pakistani-American fashion designer, television personality, and author. He is one of the very first openly gay South Asian men.

Tan is on a major show and one of the first out Muslim gay men on western television as the fashion expert for the Netflix series Queer Eye, host of the web series Dressing Funny, and co-host of Next In Fashion. His memoir, Naturally Tan, was released in June 2019.

He stands at a height of 5feet 9inches and he weighs 70 kilograms. His eyes are dark brown.

He has a husband named Rob France who is pediatric nurse and illustrator. France and his husband Tan has got married twic, in first in London and then in NYC when it became legal. The two are expecting their first born baby through sarrogate.

Tan said that:”So happy to finally share that WE’RE HAVING A BABY!!” he writes. “No, I’m not pregnant, despite this VERY realistic pic. With the greatest gift/help of the most wonderful surrogate, Rob and I are lucky enough to be on our way to being parents, this Summer. Something we’ve wanted for SOooo many years.”

France attended Hall Cross School and later Doncaster College, where he studied fashion, after which he moved to Manchester, and then to London.

He started havingintrete in designing at a very young age. At the age thirteen, he had learned how to construct and embellish a denim jacket France began to work as designer and director for Zara,Selfridges, and Bershka, among other retailers, to further improve his knowledge of the wholesale business of retail; he later went on to work at Chanel in order to learn more about manufacturing.

He started in menswear and later progressed in womenswear, where he majored on his fashion degree. In 2019 he realesed a memoir Naturally Tan through St.Martin’s Press. It became aNew York Time bestaeller. Tan is a co-host the new netflix series Next in fashion with Alexa Chung. He is the founder of women’s clothing line Kingdom and state.

Tan has earned a lot through his career. Tan is a British-Pakistani-American fashion designer, television personality, and author. He has an eastimeted net worth of $5 millio.