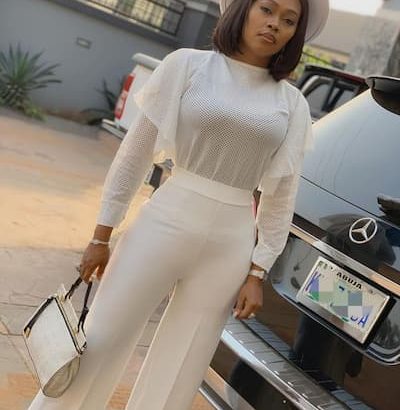 Tana Adelana was born Christiana Nkemdilim Adelana is a Nollywood actress, producer, model, TV presenter, and entrepreneur. She won the Best Supporting Actress Category of CITY People’s Movie Awards 2017 and was the 2011 winner of the on Air personality of the year (TV) at the future Awards, and the 2005 Grind Awards winner. She is of Igbo descent, her family name is Egbo.

Tana Adelana was Born Christiana Nkemdilim Egbo on 24 December 1983 in Lagos, Lagos State, Nigeria. He is 38 years old as of 2021.

She stands a height of 1.73 meters tall (5feet 8inches) and she weighs 75 kilograms. She has black eyes and black hair hey body measurements are 34-25-34 inches.

She was born into a traditional Catholic royal family home in the ’80s. She is the last in her family of ten. Tana has not given out much about her parents and siblings.

Tana is a married woman. She has been married to Femi Adelana, who is a Yoruba man for a decade now. The couple was blessed to have two kids.

She attended Treasure Land Nursery and Primary school, Surulere for her primary education, and St. Francis Catholic Secondary School in Idimu, Lagos. She is an Igbo girl from Nara Unateze in Nkanu East LGA of Enugu State.

She came into the spotlight as an OAP after auditioning for MTN Y’Hello TV Show in 2002. She is also the first Nigerian on Channel O as a TV Presenter who made her introduction in acting in the TV series, Disclosure. She started her firm production, Tana Adelana Productions in July 2013.


One of her movies titled Quick Sand, features Ufuoma Ejenobor, Chelsea Eze, Wale Macaulay, Anthony Monjaro, Femi Jacobs, and other performing artists. Tana started her TV show, Uncensored with Tana, in 2015. She has also worked with big brands like Channel O, MTN, Mnet, Coca Cola, Big Brother Africa, among others. She has also featured in movies like The Kingdom, Glass Slippers, Champagne, Single and Married, and a host of others.

Adelana is a Nollywood actress, producer, model, TV presenter, and entrepreneur. Her net worth is still under review. The information about her net worth will be updated soon.