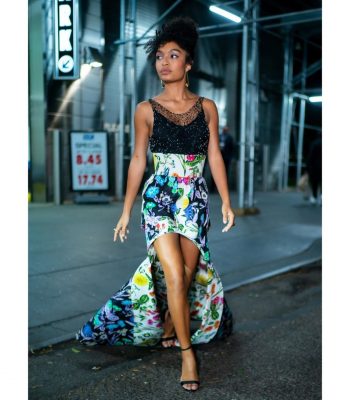 Yara Shahidi was born Yara Sayeh Shahidi. She is an American actress, model, and activist. She gained fame when she played a role as the oldest daughter Zoey Johnson on the sitcom Black-ish and its spin-off series Grown-ish. Her film credits include Imagine That in 2009, Smallfoot in 2018, and the lead role in The Sun Is Also a Star.

She stands a height of 1. 6 meters tall (5feet 3 inches). Shahidi weighs 51 kilograms (112Ibs). She is slim and has black curly hair and dark brown eyes.

She is the daughter of Keri Salter Shahidi and Afshin Shahidi who is a photographer. Her father is Iranian, and her mother is African-American and Choctaw.

She is the older sister with two brothers Sayeed Shahidi is an American actor and model, and Ehsan Shahidi who is their younger brother.

Yara likes keeping her personal life in a low profile. She has never mentioned her relationship or who she is dating. Yara does not want to mix her career with her personal life. This information will be updated soon.

Shahidi’s activism was noticed by former first lady Michelle Obama, who wrote her a letter of recommendation to Harvard University. She was also given the opportunity by Teen Vogue to interview Hillary Clinton in 2017.

She has an estimated net worth of $1 million.