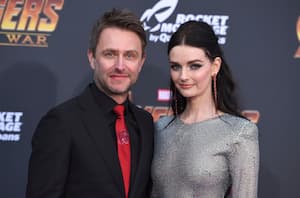 Lydia Hearst born Lydia Marie Hearst-Shaw is an American fashion model, actress, and lifestyle blogger. She is a great-granddaughter of newspaper publisher and politician William Randolph Hearst and a daughter of the author and actress Patty Hearst.

Lydia was born on 19 September 1984 in Wilton, Connecticut, United States. Lydia is 37 years old as of 2021. She celebrates her birthday every 19 of September every year.

Hearst was born in New Haven, Connecticut. She is the daughter of Patty Hearst and Bernard Shaw, and grew up in Wilton, Connecticut. Hearst’s family has a tradition of involvement in philanthropic causes which has led to her involvement in becoming a Smile Ambassador for Operation Smile and receiving the Smile Award for her dedication to the organization in 2012, and to receive a humanitarian award from Catwalk For Charity June 8, 2014.

Hearst is a married woman. Lydia is married to Chris Hardwick on August 20, 2016 in Pasadena, California. The couple are not exepecting a baby together.

Lydia and her husband Chris are exepecting a baby.

After attending The Lawrenceville School and graduating from Wilton High School (where she was a cheerleader), she attended Sacred Heart University in Fairfield, Connecticut.

Photographer Steven Meisel “discovered” Hearst and shot her first magazine cover for Vogue Italia in April 2004. Since then, she has appeared internationally on a variety of magazine covers such as Vogue, Harper’s Bazaar, Elle, Marie Claire, GQ, L’Officiel, and Esquire. She has worked with several well-known photographers such as Meisel, Patrick Demarchelier, Ellen Von Unwerth, Mario Testino, Peter Lindbergh, Inez van Lamsweerde and Vinoodh Matadin.

Hearst was briefly a columnist for Page Six, a feature of the Sunday edition of the New York Post. Since then she has launched a lifestyle/fashion blog where she now regularly posts. Hearst served alongside Anne Vyalitsyna and Naomi Campbell as a supermodel coach for the second edition of Oxygen’s The Face modeling reality competition. The season premiered on March 5, 2014.