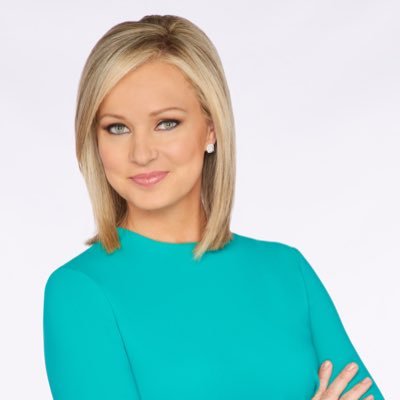 Sandra Smith born as Sandra Kaye Smith is a TV news journalist currently serving as co-anchor of America’s Newsroom on the Fox News Channel (FNC) in New York City. She originally from Wheaton, Illinois, and ran track & field while an undergraduate at Louisiana State University.

She broke into television as an on-air reporter for Bloomberg Television. In this role, she covered U.S. equities and derivatives markets, contributed to breaking news and analysis, and reported for Bloomberg Press. In April 2014, Smith began co-hosting Outnumbered on the Fox News Channel featuring four Fox News female commentators and one rotating male guest discussing current news and cultural topics.

She stands a height of 5feet 8 inches and weighs 59 kilograms. She has beautiful light brown eyes and light brown hair. Her nationality is American and she is a white ethnicity.

Smith is married to her husband John Connelly, a business commentator. They married on May 1, 2010. This was after getting engaged with each other on December 28, 2009.  The couple has two kids together; A daughter named Cora Belle Connelly born in 2013 and a son John Connelly Jr born in 2015.

Smith is known for co-anchoring the television series America’s Newsroom on the Fox News Channel. She started her career as a research associate for Aegis Capital Group. She was then a trader at Hermitage Capital Corporation and became Director of Institutional Sales and Trading at Terra Nova Institutional.

Sandra Smith worked for Bloomberg Television before she joined FOX Business Network in 2007. She became a regular on the TV series Imus in the Morning and was a frequent guest on the series Fox Business Happy Hour as well as Red Eye w/ Greg Gutfeld and Hannity. She started co-hosting the television series Outnumbered on the Fox News Channel in 2014.

Sandra attended Louisiana State University (LSU) and graduated with a degree in Business management. At the University, Smith was an active athlete who played Division 1 College Sports at the NCAA national championship. She was able to clock  11:57.98 in the steeplechase. This made her become the second-fastest athlete in the school’s history.

In October 2007, Smith joined FOX Business Network as a reporter. Beginning early October 2009, she was a regular on Don Imus’ show, Imus in the Morning. She was also a frequent guest on Fox Business Happy Hour and has appeared as a guest on the Fox News Channel late-night satire program Red Eye w/ Greg Gutfeld.

Smith is a TV news journalist currently serving as co-anchor of America’s Newsroom on the Fox News Channel (FNC) in New York City. She has an estimated net worth of $6 million. She has an annual salary of about $300 thousand.