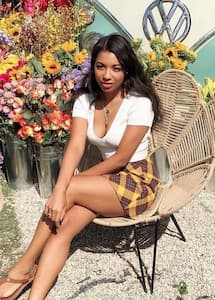 Mica Burton born Michaela Jean Estelle is an American YouTuber, actress, and famous cosplayer. Burton is best known for her appearance on the game show, On The Spot with LeVar Burton.

Born as Michaela Jean Estelle, Burton was born on July 8th, 1994 in Los Angeles, California, United States. She is 27 years old as of 2021. Additionally, she celebrates her birthday on July 8th every year.

Mica is the loving daughter of LeVar Burton, her father, and Stephanie Cozart Burton, his mother. Additionally, she is the sister to Eian Burton, her brother.

The American YouTuber, Burton, is well known for her sexual orientation. Mica stated that she was bisexual. She is rumored to be involved in a romantic relationship with Minniemoon Cospla who is also a social media star.

Mica had the privilege of attending the University of Michigan in Ann Arbor. While there, she majored in theatre and dance. She graduated from the university with honors. Subsequently, she went on to earn a Bachelor of Fine Arts in Theatre from the University of California, Los Angeles. While still in school, she expressed an interest in attending cosplay conventions.

Burton begin her professional career when she began participating in various plays and productions. During an interview with Burnie Burns (which aired on June 3, 2016), Mica talked about her personal experiences with racism. The fact that she brought up the subject elicited an emotional response from certain members of the community, who labeled her remarks as “rants” and dismissed her concerns as unjustified because she hailed from a wealthy family. Consequently, she was subjected to a storm of harassment.

AHWU #317 was where Mica made the announcement that she has been hired to work in Achievement Hunter on May 16, 2016. She revealed in a blog post on the Rooster Teeth website that she had been keeping the news a secret since the Extra Life 2015 event. Until her leave, she served as Head of Streaming, editor, and secondary host for the company. Whenever she was featured in Achievement Hunter videos or on social media, she received a significant number of negative comments. Mica quietly departed Achievement Hunter a short time afterward to work as an editor and host for The Know, a podcast about technology.

On April 30, 2018, Mica announced her departure from Rooster Teeth and return to Los Angeles to pursue her acting, cosplaying, and modeling talents. On June 3, 2020, Mica disclosed that her departure from Rooster Teeth was a direct consequence of the company’s lack of support for her throughout the period of internet harassment. Her coworkers were more concerned about her father’s displeasure with the corporation than her health at the time of the harassment. Barbara Dunkelman, Geoff Ramsey, Jeremy Dooley, and others backed her up.

Mica Burton Net Worth and Salary

Burton has an estimated net worth of $700k. She makes a great fortune from her career as an actress as well as a YouTuber. However, her annual salary is currently unavailable. This information is however currently under review and will soon be updated.